About Amat » School Philosophy and History

Bishop Amat High School is a four-year co-educational Archdiocesan Catholic High School.  The school seeks to form a community of faith-filled people committed to Christian truth based on the teachings of the Roman Catholic Church.  The principles of Christian life outlined in the Gospel, interpreted by the Catholic Church and taught at Bishop Amat High School, invite followers to a life-style rooted in a personal relationship with the Lord Jesus Christ and extending out in loving service to others.  Education to this lifestyle, while the primary responsibility of parents, is shared by faculty, staff, and students, as all seek to grow in personal awareness of their call to bring the presence of Christ to our modern world.

The school motto calls for education in Goodness, Discipline, and Knowledge.  While it is important that our students experience these values in the academic content of the school, they must above all see them present in the lives of their parents and teachers.  Seeing living witnesses who cherish the values they seek to acquire, our students will more readily embrace them for themselves.

The call to Goodness involves all aspects of one’s lifestyle.  It primarily involves daily prayer through which one comes to know personally the tremendous love of the Father.  It includes a willingness to be like Jesus in sacrificing oneself for others, aware of their supreme dignity as human persons.  “If anyone wishes to follow me, he must deny himself, take up his cross and follow me.”  (Mt. 16:24) Goodness also involves being empowered by the Holy Spirit to join with others in forming a community in service of others and in concern for the physical, social, and spiritual environment in which we live.  In all aspects of student life, but especially through service and campus ministry, Bishop Amat High School tries to instill goodness as the binding force of the “Amat Family.”

The importance of Discipline and a disciplined lifestyle follows from the call to Goodness.  The underlying purpose of the disciplinary code is to help students master the internal forces of their personalities so as to enable them to submit themselves to the Lordship of Jesus Christ.  Thus obedient, they will be responsible and accountable members of the human family.  School regulations such as the distinct dress and grooming regulations are part of the call to self-respect, self-discipline, and personal responsibility.  The aim of Discipline is not conformity but authentic freedom to be all that God has created us to be.

The Knowledge taught at Bishop Amat High School reflects the varied needs of our student body, a diversified campus that includes many academic abilities.  The multi-cultural student body itself provides an atmosphere of learning that enables the students to affirm their own cultural traditions and to be enriched by the other cultures, which they encounter here.  The Knowledge taught at Bishop Amat High School flows from a college-prep curriculum, which prepares students for continued instruction in institutions of higher learning.  However, the curriculum is designed with the flexibility to help all students of varied academic abilities to reach their full potential.  The instructional program centers on a solid foundation in the scholarly disciplines within a Christian perspective, and along with the co-curricular and counseling programs, gives emphasis to the spiritual, personal, social, and physical development of the adolescent.

A willingness to participate in this call to a Christian lifestyle is a pre-requisite for admission to Bishop Amat High School.  The entire school program seeks to instill a sense of values, integrating knowledge of God and His plan for creation into the entire curriculum of the school, and assisting students in finding their identity in Jesus Christ by giving their lives to Him.

The mission of Bishop Amat High School is to integrate Catholic values into all areas of the life of the adolescent, values which are essential for the lifetime pilgrim journey of a follower of Christ.  In His teaching, Jesus calls us to be leaven, salt, and light . . . the leaven which raises the values of society, the salt which gives the flavor of faith to the world, and the light which reveals the presence of Christ alive in His people.

Bishop Thaddeus Amat built St. Vibiana’s Cathedral, which was consecrated in 1876.  He opened the first schools in Los Angeles and invited the Vincentians to open St. Vincent’s College, which was the predecessor to Loyola University.   Bishop Amat Memorial High School was formally dedicated to his memory in October 1959.  Bishop Amat High School was built by the Archdiocese of Los Angeles in 1957 to serve the Catholic families of the San Gabriel Valley.  Funded through the Cardinal McIntyre Youth Education Fund, Bishop Amat was founded as a co-educational high school.  The school opened in the classrooms of St. Christopher’s School (boys) and St. John’s School (girls) in September 1957.  On December 16, 1957 the present campus site was opened.  His Eminence, James Cardinal McIntyre formally dedicated the campus in October 1959.

The campus site has grown over the years with the present 200 and 500 wings added in 1959.  The gymnasium was added in 1962, the stadium in 1965 and the 300 wing in 1966.  In 1973, the school formally became co-educational, with a single administrative structure.  A building dedicated to the performing arts was completed in 1982.  Four classrooms, including a full computer lab, containing the latest technology available, were completed in 1988.  A second computer lab was added in 1992, a new state of the art biology lab in 1993, a refurbished physics lab in 1994, and the Brutocao Library  in 1995.  In 2000, a new covered lunch structure was built complete with an integrated sound system and barbeque pit.

In 2002, the school undertook a major renovation with plans for the replacement of the Tate Duff Memorial Gymnasium.  On May 16, 2004, the Living Rosary was held as the first activity in the new facility.  The Monsignor Aidan M. Carroll Student Activity Center houses a main pavilion which seats 1,600 spectators for Masses, assemblies, rallies, and basketball and volleyball contests.  The building also includes a dance studio, locker rooms, an updated weight room facility, a dining room, and offices for members of our athletics and activities programs.

Other recent campus improvements include the addition of high-efficiency air conditioning and heating of all classrooms to maximize student comfort, the integration of campus WIFI capabilities, and the installation of a six-lane, all-weather running track in Kiefer Stadium.

Enhancement of the campus continues with the addition of a state of the art performing arts center built to showcase Bishop Amat’s varied choral, dance, music, and theater programs.  The school community looks forward to groundbreaking for the new facility in 2018.

When the school was opened in 1957 it was part of the Cardinal McIntyre construction boom in Catholic Schools.  The original staff was composed primarily of men and women religious. Women from the Sisters of the Immaculate Heart, Sisters of St. Louis, Sisters of the Sacred Heart, Carmelites, Benedictine Sisters and Franciscan Sisters taught the girls.  Fathers of the Sacred Heart of Jesus staffed the boys’ department.  The early faculty had very few lay teachers.

In 1981, Mr. Merritt Hemenway, a member of the Class of 1964, was appointed as the first lay principal of the school.  He was succeeded in 1990 by Rev. James Anguiano who served until 1992, at which time, Msgr. Aidan M. Carroll was appointed.  On January 1, 2001, Msgr. Carroll was named as President/Principal of the  school.  In July 2002, Dr. Merritt Hemenway was named Principal and Msgr. Carroll,  President.  In 2012, Mr. Richard Beck was named Principal.  Since its inception, Bishop Amat has excelled in building Catholic leadership in the areas of scholarship, athletics, and activities.  Christian Service is an inherent element of the school philosophy, and students are encouraged to serve the school and community.

The foundation of Bishop Amat’s comprehensive curriculum is a solid core of college preparatory courses complemented with Accelerated, Honors, Advanced Placement, and the International Baccalaureate Programme. In 2005 Bishop Amat was approved for accreditation by the prestigious International Baccalaureate Organization. In eleven years of offering the IB Full Diploma option over one hundred students have completed the demanding requirements that offer outstanding preparation for university admission. Overall, more than 98 percent of the school’s graduates attend college, and many are accepted to the most prestigious colleges and universities across the country. 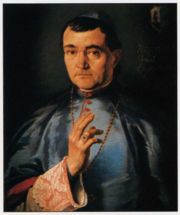