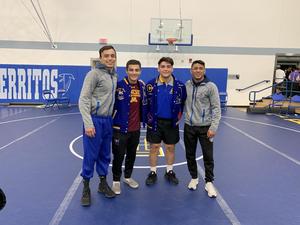 AMAT WRESTLERS WIN CIF MASTERS CHAMPIONSHIPS
Seven of Bishop Amat’s finest wrestled this past weekend at the CIF Southern Section Masters championship at Cerritos College. Four Lancers placed and qualified for the CIF California State Championship tournament to be held next weekend at the Rabobank Arena in Bakersfield. The wrestlers consisting of Chuy Lopez (113 Pds), Christian Nunez (126 Pds), Marcos Polanco (132 Pds), Adrian Rios (145 Pds), Juan Lopez (152 Pds), Romeo Hernandez (195 Pds) and Guillermo Escobedo (220 Pds) accumulated several points by way of victories, securing a 6th place team finish.
Both Guillermo Escobedo and Marcos Polanco finished the tournament undefeated and winning the CIF Southern Section Masters Championship in their respective weight classes. Escobedo found himself wrestling the favored Chaminade wrestler who obtained a victory over Escobedo the previous week at the CIF Divisional Championship. Escobedo wrestled brilliantly, beating his opponent by a score of 3-2 and securing his second CIF Masters Championship. In the 132 pound weight division, Polanco cruised through his bracket and secured the championship by beating his opponent from Northview High School in the finals match by a score of 4-1. This was the first time Bishop Amat has ever had two CIF Southern Section Masters Champions in one season.
Christian Nunez also found himself on the podium and qualified to advance to the State tournament. Nunez won four matches in the tournament and entered the finals match against a formidable opponent from Esperanza high school. Nunez was ahead by a score of 2-1 when his opponent obtained a reversal, obtaining 4 quick points and closing out the match ahead of Nunez by a score of 5-2. Although finishing as the CIF Masters runner up at 126 pounds, Nunez is considered as one of four who could wind up in the finals match at the State tournament.
Lastly, the last wrestler to qualify turned out to be an emotional roller coaster ride for the Amat fans present. Adrian Rios came one match short the previous year from entering the qualifying matches at Masters and found himself in a similar predicament in this year’s event. Rios won his first match and lost his second, sending him into the consolation bracket. Rios needed two victories to stay alive in the tournament and a loss would have eliminated him. Rios battled through his next two matches, obtaining victories, by scores of 7-2 and 3-0, and advancing to the qualifying matches. On his fifth match, Rios was defeated by a score of 8-2, leaving him to wrestle for the last qualifying spot. Again, Rios found himself close to elimination if defeated. Instead, Rios dominated both opponents in the final two matches with a fall and a major decision by a score of 10-1, obtaining the 9th place finish at the 145 pound weight class, qualifying for the state tournament!
Best of luck to the four Amat Lancers at the CIF State Championship tournament next week!
CIF State Wrestling Information can be found by clicking this link - CIFState Wrestling
Published February 18, 2019 Print